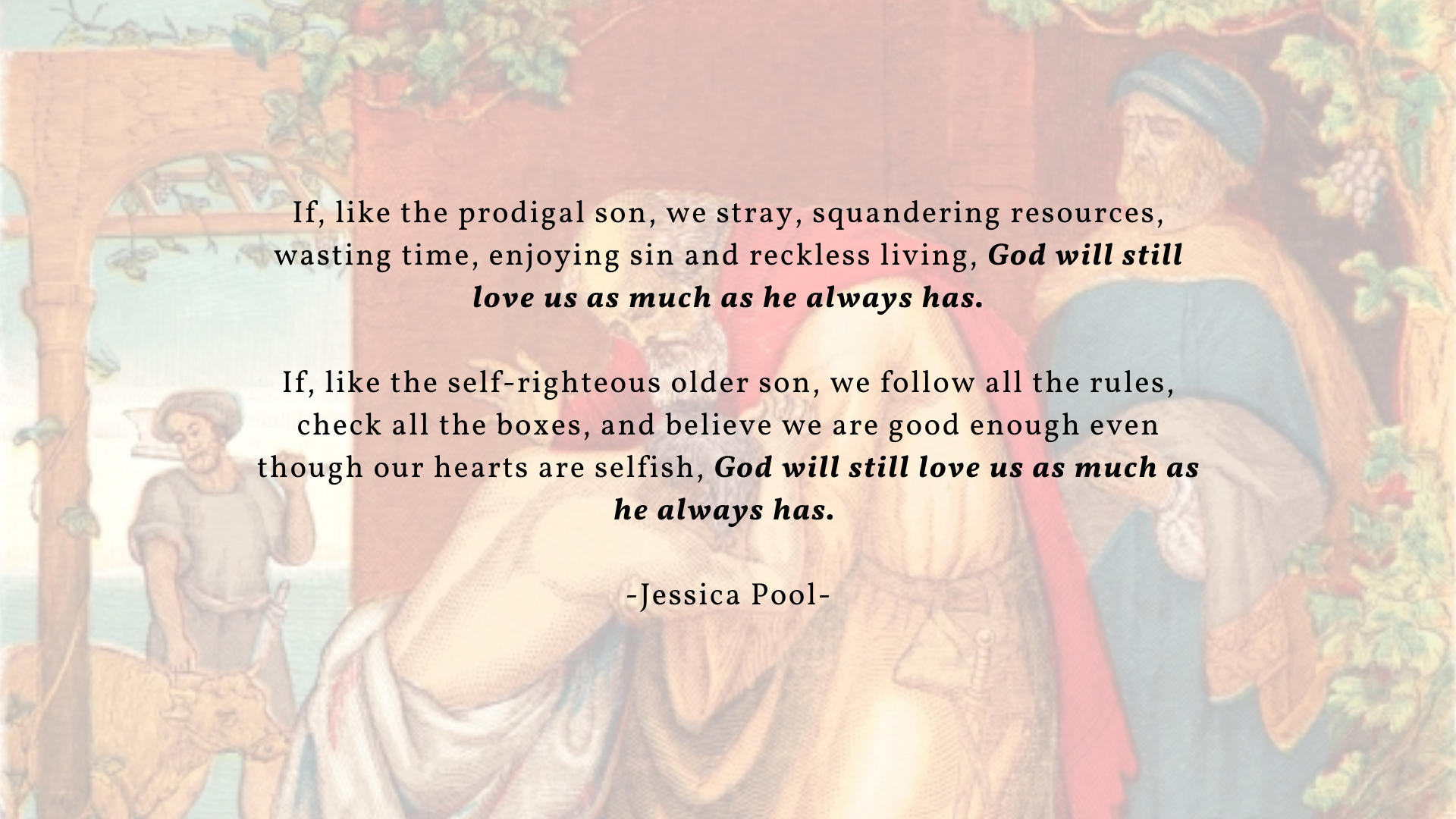 One of my favorite Bible stories to read to my kids is the story of the prodigal son. I love sharing this story with them and reminding them that no matter how far they stray, they can always come home. No matter how bad they mess up, their dad and I will always forgive them. And as true as this is of our love for them, it is even more true of God’s love for them.

Many of us read this story (Luke 15:11-32) and identify with the prodigal son. He’s fed up with life on his father’s terms and demands his freedom. He takes his inheritance early and sets off to enjoy independence and fun. After squandering his inheritance in “reckless living,” the son hits rock bottom, taking work feeding pigs and envying their slop. Some of us have been there, thinking we’ve messed up so bad, there’s no way God would take us back as his child. Like the prodigal son, we think maybe if we apologize and do some penance, we can come home, even if it means sleeping in the servants’ quarters and knowing we’ll never be fully accepted back into the family.

Those of us who relate with the prodigal son have likely been shocked and delighted to come face to face with the overwhelming grace of God for sinners. When the son is still a long way off, his father sees him and sprints to him, scooping him up in his arms, weeping with joy that his son has returned home at last. The son couldn’t believe it; he was expecting a scolding and hoping for a place among the servants. Instead, he found a loving father rejoicing that he’d finally come home, pulling out all the stops to celebrate his return.

Perhaps you’ve experienced a season of “reckless living” like the prodigal and were met with God’s grace upon your return home. Maybe you’re in that season right now, and it’s time to come home. The Father is waiting not to scold you, but to shower you with grace.

Some of us read this story and identify more with the older brother, maybe even feeling a sense of superiority that we never had a serious rebellious stage like the younger brother. While the other son was out squandering his inheritance, the oldest son was home, working away dutifully as a good son should. He did what his father asked, he took care of his chores, and he never strayed. When he hears the party and discovers that his little brother has returned home after losing everything, he is furious.

“What about me?” is the question at the heart of his anger. He has followed all the rules, so where is his reward? The father responds to his oldest son’s self-righteousness much like he responded to his wayward son: with grace. “Son, you are always with me, and all that is mine is yours.”

Maybe, like the older brother, we’ve never really done anything that bad. Outwardly, the oldest son had a spotless record and resented his younger brother’s adventures in fast living. Perhaps some of us have unwittingly adopted a sense of self-righteousness, entitlement, and independence. This may present outwardly as moral living, being “good,” and doing what we’re supposed to do. Inwardly though, this means we’ve dismissed Jesus and pulled ourselves up by the bootstraps, crafting a false righteousness that we believe makes us worthy of love.

Perhaps you lack compassion for your struggling brothers and sisters. Maybe you are doing all the right things, but your heart is full of pride. The Father stands ready to forgive you and remind you that he is with you always.

Christian, read this and believe: there is nothing you can do to make God love you any more or any less.

If, like the prodigal son, we stray, squandering resources, wasting time, enjoying sin and reckless living, God will still love us as much as he always has.

If, like the self-righteous older son, we follow all the rules, check all the boxes, and believe we are good enough even though our hearts are selfish, God will still love us as much as he always has.

So what do we do with this steadfast love that looks beyond our behavior? Do we give up pursuing holiness and do whatever we want? Do we cultivate our image so that we appear extra holy? What is the appropriate response to a Father who loves us whether we’re good or bad, right or wrong, near or far, needy or arrogant?

We run to his arms. We repent of licentious living and legalism, receiving his forgiveness. We enjoy his embrace. We savor the feast, celebrating other children who have found their way home, delighting that we get to be with our Father too. With the help of the Holy Spirit, we do our best to obey him, not because we want a reward, but because we love him. We come home and rest in him. All that he has is ours.

Loving Jesus and loving others

The Faithfulness of God